The Mission at its Best, the Mayor at his Worst

The community stayed until midnight, gathered around the screens in Supervisors' offices and overflow rooms like la familia watching the public comment. The human drama unfolding with each testimony was the reality TV of a neighborhood and people in crisis. Evictions, all their money going to rent, feeling like strangers in their neighborhood, Latino culture and diversity draining out of the Mission, out of San Francisco. Inside the Board Chamber, the line to comment about the moratorium looped around and out, for over seven hours, until all the offices and viewing rooms were emptied. Until everyone there had already spoken, either before the Supervisors, or in the halls, following energetic youth chanting in unison.

They would hush each other as someone waited in the wings who promised to be a kick-ass speaker. And that community member always delivered, with passion and grit. Youth and mothers brought stories of being pushed out and living in SROs, asking the undecided Supervisors to try to sleep a day with their worries. We are your teachers, first responders, cooks, cleaners, domestic workers. We are your future. We make the City run, so don’t ignore us.

For hours only people urging to support the moratorium came up, one after the other. Only nearing the end of over seven hours would little clusters of clean-cut pro-development contingents come up. Always starting with a note of sympathy that quickly dissipated to condescension and a lesson on supply and demand. We can’t fix years of neglect with one moratorium. Tell us something we don’t know.

The community closed out public comment with the heavy hitters, organizers who have worked in the Mission for decades and years, who see daily what it means for families and workers to be pushed out of their homes, giving fiery speeches that were met with applause and cheers. Community advocates like Tere Almaguer and Oscar Grande from PODER, Jadma Noronha, Diana Martinez and Chirag Bhakta from the Mission SRO Collaborative, Tommi Avicolli-Mecca from Housing Rights Committee of SF, Andy Blue of Plaza 16 Coalition, Maria Zamudio of Causa Justa Just Cause, and Roberto Hernandez of Our Mission No Eviction. They rode on the wave of awe and inspiration of the turnout, the testimonies, the truth to power. "Si Se Puede!" was the chant and the exhilaration that closed out public comment.

But the mood soon plummeted after an early roll call of votes, quickly sussed out Supervisor Katy Tang, a critical vote, as a “No.” Mayor Ed Lee appointed Tang to her seat in the Sunset before her election in November 2013 and 2014. Then Supervisor Malia Cohen interceded, asking Board President London Breed to not skip the deliberations. Cohen proceeded to ask an interminable amount of questions to Planning and the Mayor's Office of Housing. Her questions left one wondering why she waited until then to find out about the statistics she sought, and appeared to lay the groundwork for a “No” vote.

Although Mayor Lee was never present, Planning Department's Senior Policy Adviser, Anne Marie Rogers and Olson Lee, Director of the Mayor's Office of Housing, made his position known. The moratorium would cripple funds needed for transportation improvements and even affordable housing. The 13 sites in the Mission that have been identified as qualifying for federal funding for affordable housing can not be bought with existing funding measures. Supervisor David Campos reminded Cohen that the City’s Chief Economist said this 45-day moratorium would have no economic impact. And clearly, the status quo at Planning and MOHCD is broken, which is the reason all these people came to City Hall and the moratorium was introduced in the first place.

The votes were finally taken and it was a "Yes" from Campos and his co-sponsors, Supervisors Jane Kim, John Avalos, Eric Mar and Norman Yee, along with Cohen and Breed, who clearly heard the loud calls for Black and Brown unity from their constituents and faith leaders. But it was a “No” from Supervisors Scott Wiener and Mark Farrell, as was always expected, and from Tang who already let the cat out of the bag. Supervisor Julie Christensen, another Mayor appointee representing Chinatown and North Beach, voted “No,” killing any prospect of her being seen as a woman of the people in this November’s election. Christensen remained true to her remarks against the moratorium even before public comment began.

Those who stayed until the bitter end were dejected and in shock that any Member of the Board, who heard the hours of comment and hundreds of people demanding, begging and urging for the moratorium, Board Members who don’t even represent the District in question, would let their political alliances and pro-market ideologies ultimately decide. Washing over the stalwarts were a mix of disappointment, emotional wariness, and still burning passion to keep on. On to the next, said the veterans of this fight. This is far from over. There are still plenty of people in the Mission, the City and the Bay ready and willing to fight. And they will clearly keep going until their demands are no longer met with deaf ears. 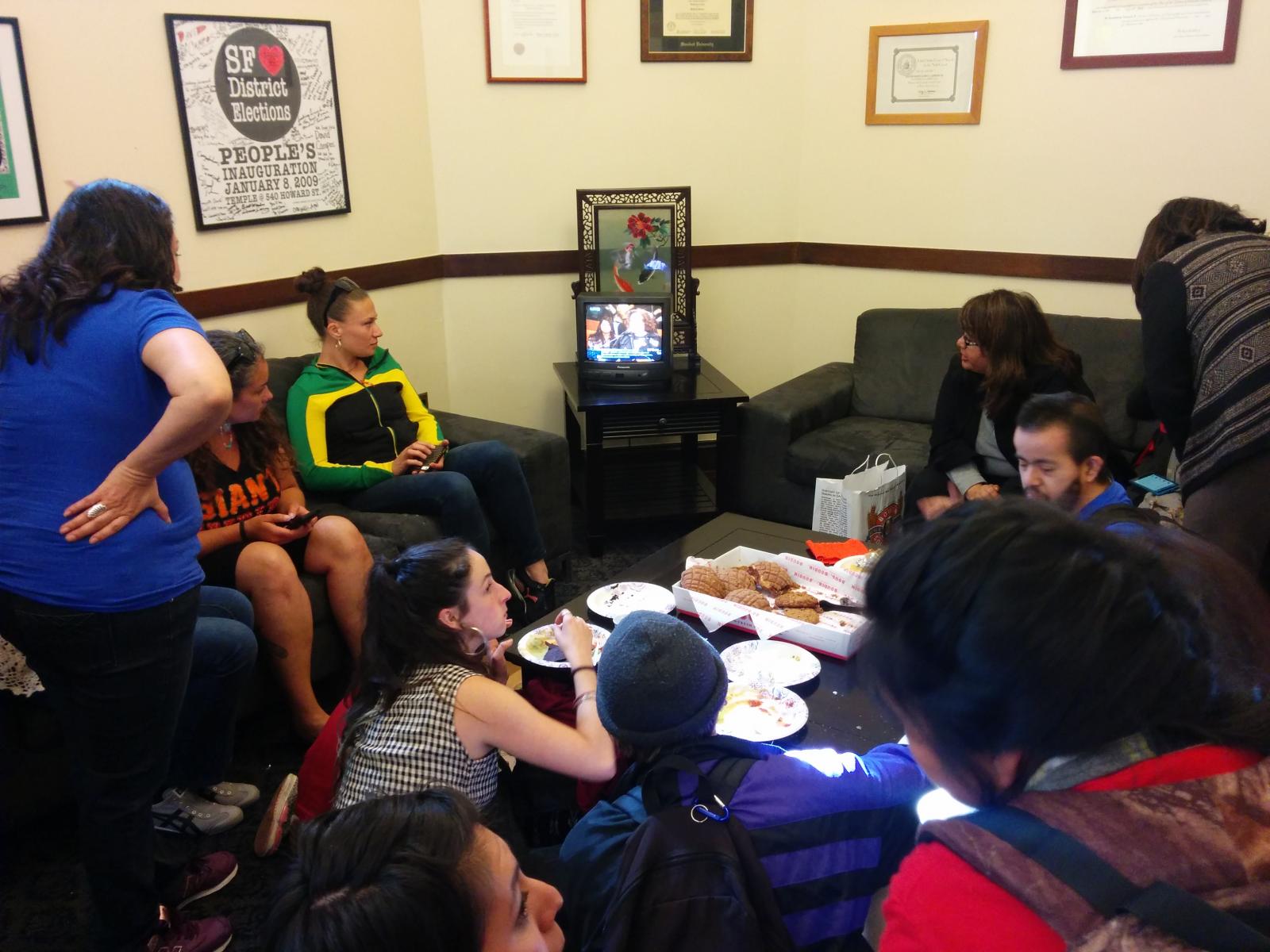 It was the Mission community at its best. The weeks and long hours of phone banks, speaker trainings, and planning culminating into hundreds of youth, seniors, and working class people spending their day and night at City Hall. It was the Mayor at his worst, absent the entire time, no comment, no sighting. Nothing. Except for those who do his bidding, voting his way, laying out doomsday scenarios and the self-made limitations on affordable housing production that are always rolled out when the City is criticized.

So much of the City is bought and sold. And the moratorium was a chance to stop the sell out. “People over profits!” was a ringing refrain. But not all of the Mission has been sold off. The heart of the Mission, the people who were there last night, is alive, not well, but still alive, and kicking.