New market rate housing proposes to rip through the heart of the Mission with the ultimate irony. Planners think they’re realizing the dream of “Transit Oriented Development” by allowing high density housing adjacent to one of the Bay Area’s busiest transit hubs. Victory at last! But who will live there?

Everyone’s seen the massive tech buses forcing their way through the city’s streets. So this means that these new residents probably won’t even use the transit it’s next to! So much for “Transit Oriented Development!”

Sites like these should have been zoned for 100% affordable housing.

The development Maximus Real Estate Partners has proposed appears to be allowable per current zoning. Therefore, people concerned about neighboring Marshall Elementary School and gentrification in the Mission and beyond have a long tough battle ahead. It didn't have to be this way.

Prior to the Eastern Neighborhoods Plan going into effect in early 2009, community members pushed for sites like these to be zoned as 100% affordable housing-- for people who use public transit and public schools and keep the city running while working low and moderate wage jobs. These recommendations were presented to Planning as the People's Plan for rezoning the Mission and came from a years' long process of community meetings and engagement.

Planning didn’t adopt these recommendations despite the fact that it may be good public policy to zone high density housing within walking distance of regional transit hubs, but it’s far better public policy to restrict that zoning for affordable housing.

People with fewer resources have less choice about where to live, so policies and zoning should give people with lower incomes the opportunity to live close to work and transportation.

Wealthy people-- the ones who can afford the current average rents in San Francisco-- have more choices and greater mobility. One of the primary reasons for the tech buses crowding narrow Mission District streets is that tech workers don’t want to live in boring Silicon Valley. Why should we prioritize Silicon Valley workers living at a transit hub when they’ve already created their own privatized transportation system?

They want to live at the hipster intersection of 16th and Mission, but they probably won’t even take the public transit that’s at their doorstep to get to and from work.

The question of what belongs on this site is much larger than the shadow cast on the public school’s play yard. The project approval process is currently weighted so heavily in favor of this development and at such a disproportionate cost to those who have their kids enrolled in our public schools, that we end up with parents arguing about whether to continue to fight these massive, expensive towers, or accept the biggest payout possible from the developer.

“The Board of Education is free to communicate their support or lack thereof for the project, but they are not formally part of the entitlement process,” said the Planning Department Communications Manager Gina Simi when we reached her for comment.

So, this project is lining up like so many others before it in San Francisco. Developers will complain about too many delays and too much process. It’s these pesky advocates standing in the way of progress and profits.

But these advocates represent communities-- people who actually live and work in San Francisco and take the time to go to committee hearings of the Board of Education. Whoever says that homeowners are more invested in their communities than tenants has never been to a public hearing in San Francisco.

Tenants and working people who live here but have no hope of ever buying a home in this expensive city are every day at risk of being evicted. Yet they go to meetings to plan the future of their communities and they take time give public comment.

What leadership will we see during the approval process from Planning and the Board of Supervisors? The Board of Education is not the body that decides what happens with this development despite the real short and long term impacts on the adjacent public school. They will make some comments and recommendations and forward those to Planning.

When this development goes to Planning, the outcome will be predictable. Planning has bought into the “supply side” argument that building any kind of housing is beneficial for San Francisco. That if we just build more high price housing that at some point we’ll all be able to afford it. Ok-- even if we think that this unicorn is real, what’s really happening to real people every day right now is that they’re being priced out of this city.

Look at all the construction underway in San Francisco.  Yet prices are still on the rise, and speculators keep evicting tenants. Through the approval process for this development, Planning should take a hard look at why this is NOT a 350 unit affordable housing development near a transit hub-- and why we are NOT building at scale for people who DON’T jump in an air conditioned, wifi enabled tech bus to get to their Silicon Valley job? Planning should prioritize housing for those who hope every day that their building doesn’t get Ellis Acted because they’ll have to leave San Francisco and maybe the Bay Area?

A long line of mothers and teachers expressed concerns about the proposed development at the Board of Education’s Committee in June. At the end, they were challenged by Board member Hydra Mendoza to come back with solutions not just concerns and criticisms.

But let’s look at what parents and teachers are faced with. The State of California has reduced its funding for public schools to being one of the lowest in per student spending in the country. A developer is dangling money in front of the School District. This bag of gold is dividing parents, teachers and school administrators between those who want the developer to pack their bags and leave this site alone, and those who want to get every dollar they can from the developer while they have the chance because the State bled the District dry.

The Mayor and our Board of Education need to push Governor Brown to fund our public schools so families can be guaranteed an excellent education. And our Board of Education needs to advocate to our Planning Department for serious consideration when students’ health and learning might be impacted and when continuing gentrification threatens enrollment in our public schools. These are short term and long term cumulative impacts Planning cannot ignore. 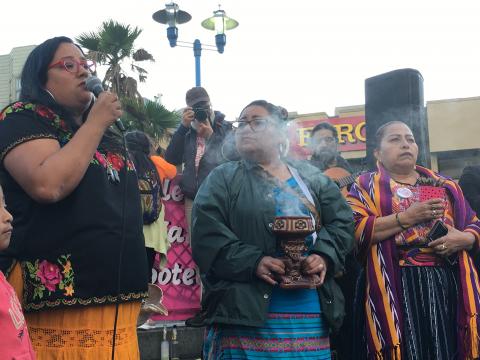