Public land should be used for public benefit. This seems like a simple principle, but for some reason this doesn’t seem to be the case for San Francisco.

The City owns several large plots of public land that are no longer needed. These include obsolete MUNI yards and a reservoirs that have never stored water. In a city where land is so scarce, one would think that these ancient gems would be re-polished to meet the City’s greatest needs, such as affordable housing, and affordable commercial spaces for small businesses and nonprofits.

Instead, like a venture capitalist in the hunt for billion dollar startups as elusive as the mythical creatures, the City is chasing unicorns. In this delusionary quest, it is proposing to re-purpose some of its most precious and long-held assets– its public lands. The City’s Public Land for Housing project, which will set the policy for how the City will use its lands for housing, is now underway. Among the goals is to develop 2,000 market rate housing units scattered among the first five pilot sites– the Balboa Reservoir and Upper Yard in the OMI, 4th and Folsom in the SOMA, 1950 Mission in the Mission District, and Wall 322-1 at Pier 70.

San Francisco’s Housing Element says the City is behind in its affordable housing goals by about 16,333 units for households earning up to 120 percent of median, roughly equivalent to the total number of existing housing units in the Inner Sunset neighborhood. An income of $116,500 for a four-person household is 120 percent of area median income. The last thing the City needs to do is abdicate any of its land to create more of the nation’s priciest housing.

There are so many reasons why this is a poor policy direction. This is the first of a two-part exploration into this complex issue showing why using any public land for market-rate housing just doesn’t make economic sense. The second part explores the City’s desperate need for affordable spaces and solutions to make public lands 100 percent affordable.

1. The best deal the City will get for affordable housing is to use its own property. The city paid little before and will have to pay a lot now in the future for land.

Compared to what it would cost to buy land today, this land we bought decades ago is a bargain!

According to San Francisco’s Housing Element, in order to catch up with its affordable housing deficit, the City needs about 327 sites, assuming that each site yields 50 units. If evenly distributed throughout the City, this means 30 affordable housing sites in every Supervisorial District.

Despite this huge need, the City’s Public Land for Housing program is looking at making only “50% of the units … affordable to low and moderate income households.” That means that half of the units will be rented or sold for market rate. Half of the 4,000 units will be out of reach of most San Franciscans!

This City has very little land left for development. In 2007, the City estimated that for a multifamily development nearly 22 percent of the cost is land. This is a significant cost that could be spent on building new units of affordable housing rather than spent on buying new sites because we’ve sold sites the City already owns. If the City gives up any square foot of land that it owns, it will have to buy another bit of land somewhere else at market rate in order to keep pace with its affordable housing needs.

2. The City should transfer these properties for affordable housing at less than current market value.

The City says that the enterprise departments that own these lands need to get fair market value for the sale or lease of these sites. This is one of the reasons why they are selling them off to market rate developers.

“Under the City Charter, as well as ratepayer and bondholder requirements, the landowning enterprise departments currently participating in the program must receive fair market value for their sites,” said the Director of Communications at the Office of Economic and Workforce Development, Gloria Chan, in an email to [people. power. media].

However, provisions in the City’s Administrative Code appear to allow the Board of Supervisors to decide how to sell these properties and at what price. These provisions even allow for transferring properties for less than full market value if such terms “will further a proper public purpose.” Or, if the property is under the purview of the Public Utilities Commission, the property can be sold at “the historical cost of such Real Property.”

A policy argument can be made that the City doesn’t need to prioritize making money off the sale of the lands when they can be used for the public purpose of housing San Franciscans. The City can simply make affordable housing a priority at these sites and work it out among its various departments how much will go from one part of the City’s coffers to another.

Having one City department (i.e. the Mayor’s Office of Housing and Community Development) pay an enterprise department market price for their land seems laudable, but we have to remember that these surplus sites sites are not currently generating much income if any. Some of them are still being used by these revenue generating departments, but these “enterprise” departments do not rely on income from these properties to fund their operations. Income generation hasn’t been a priority for these sites for many years, why should it now?

Whatever goals you look at, the City is behind in its affordable housing goals. For example, there’s the Residential Pipeline, the City report on every fiscal quarter that looks at what is built or entitled from 2007 to now. The numbers are compared to the Regional Housing Needs Assessment (RHNA) goals established by the State of California. San Francisco is accountable to RHNA goals, based on population growth and job creation, and should be creating zoning and regulations to meet these goals.

RHNA is broken down into income levels. It should come to no surprise that the City is substantially overproducing for high-income earners, while the low and middle income people have very few new housing units built for them. At above moderate income, an income that is more than $85,600 annually for a single person, or more than 120 percent area median income (AMI), the City has built over double the RHNA goals. There’s twice as much luxury housing being built than San Francisco actually needs.

If we’re so behind on housing that’s affordable to low and middle income people, why would San Francisco’s help facilitate building more un-affordable units? Especially when the market is clearly able to produce these units without the City’s land.

As Planning said in an email referring to examples of this model, it has been gaining much currency in New York. But as Henry Grabar writes in reference to New York’s plans to encourage market rate development as a way to subsidize affordable housing, “Entrusting affordable housing to real estate developers is a bit like going to McDonald’s to lose weight.” Building more high end housing increases the cost of housing for everyone not just in the new market rate development, but for everyone around that new development. Existing housing around a new development will see increases in their rent as the neighborhood gentrifies, a process playing out throughout neighborhoods in New York (i.e. Brooklyn) and San Francisco (i.e. The Mission).

“Every single one of those projects, the price for the land was either nothing, or so severely reduced that it didn’t resemble anything like the market,” Jones said. The price that was paid by MOHCD or the Redevelopment Agency was a completely different price, but in either case, that cost was not downloaded to CCDC.

For instance, CCDC paid $500,000 as a land price for the Broadway Family site. When asked what the property was worth on the market, Jones said, “At that time it wasn’t crazy prices like now, probably in the $3 to $4 million range.”

The savings to the affordable housing developer of not having to pay market rate for the land are passed on to the people who now live in the buildings. “In all of those cases, we were able to tier rents,” Jones said, “We had some households that were affordable to 30 to 40 percent of Area Median, and some households at 50 percent of Area Median.”

“And we were able to build good quality housing with all the amenities that made sense. Without that low land price, we would have either not been able to tier the rents. We wouldn’t have been able reach lower income people. Or alternatively, we wouldn’t have been able to create the quality of housing that we did,” Jones said. Another benefit is at Broadway Family, there’s a childcare space in the building “essentially rent free,” Jones said.

CCDC is not the only example of a developer in San Francisco who was able to build affordable housing on public sites. Bernal Heights Neighborhood Center (BHNC) and Mercy Housing have also built affordable housing in this way. (Writer Joseph Smooke is a former Housing Director, then former Executive Director of BHNC.)

There is little economic sense in selling public land for any market rate housing when those units will house only rich people. In the second part of this story, we will explore the extreme need for affordable options faced by students and their families, City workers, nonprofit organizations and so many working class San Franciscans. We will also explore all the options the City could take to provide 100 percent affordable housing. 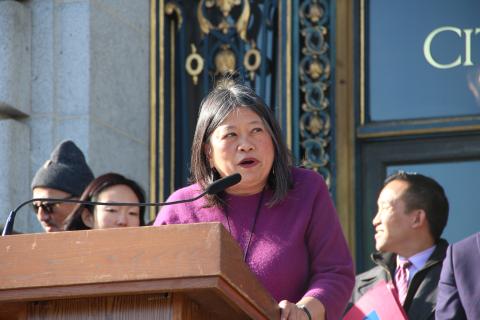