The San Francisco Planning Department released a video on Nov. 7, 2014 that talks about the housing crisis in the City and what Planning and Mayor Ed Lee's administration is doing about it. The video is part of the 2014 Housing Element Update. Watch the video above or click here.

In a Q & A with [people. power. media], Co-director of theSan Francisco Council of Community Housing Organizations (CCHO) Fernando Martí critiques the video's misinformation and lack of real numbers and strategies for providing affordable housing to the City's residents. While videos may not be able to show a lot of detail, it’s what Planning emphasizes that counts.

A: I’ve been calling it an infomercial. It’s a well packaged take on the problem. You know that there is a housing crisis, then it tries to go into how the City is approaching a plan for growth for developing new housing. But it completely misses the mark around income levels and demand by various income levels. And so the plan that’s talked about has very little in the way of actual ways of responding to the growth in jobs and the demand at all the different income levels in the City.

Q: How much do you think this will influence the general consciousness around City land use policies?

A: There is an effort to reach out to a constituency who look to SPUR and those organizations for information about how we are solving the housing crisis. The people who commented on the YouTube page of the video said things like, “This is the greatest thing the Planning Department has ever done. It’s so great to see them addressing the problem in a serious way. Once we get high rises in every neighborhood our problems will be solved.” So I think that is the the audience.

Q: In the video, the Planning Department seems to say we could be producing more housing, and more housing units would make the City more accessible and affordable to more people. What are the problems with that rationale?

A: It’s the line that comes from all the kind of growth boosters of the City- supply hasn’t kept up with demand; we have not been producing enough housing for the demand created by the job growth in the City. They’ve got a nice little graph around looking back from 1980 to today, the population started growing and we haven’t built enough for all of that population. Some of it is how you cut the data.

In fact, if you look back a little further, as far back as I’ve been able to get construction data which starts from 1960, we’ve built 1.4 units of housing for every new person that has come to the City. That has to do with the suburban model from the ‘60s to the ‘80s. People were still leaving the City but the City kept building and since 1970 has built at steadily increasing levels every year.

If you break that down by income levels, the problem is that supply for low income has been abysmal. Supply for people at the moderate income has been abysmal. And supply for those in the market rate and luxury housing has been double since we’ve been doing these Regional Housing Need Plan (RHNA) housing needs assessments. In our Housing Element by income level, every year we’ve produced twice as much as the jobs that are being created at those income levels. The demand at that upper income level is a regional demand and global demand that is being met by what’s being built.

Q: How do we produce housing for people that the market’s not providing for?

A: There’s got to be a State solution, a public sector solution for that partially, and partially a regulatory solution. The video does talk about the investment that the City has made in low income affordable housing and inclusionary zoning policy. The question is then setting those benchmarks to actually meet the need. How many sites would we need to build affordable housing or housing that is affordable to people making less than the median? So half of all our sites are available for construction, or the capacity of those sites should be bought, acquired and reserved for building housing for those folks.

The other part is what can inclusionary housing build or what should it be building? If we were to truly address the problem what would that look like? And then can we work backwards from there to how we get there.

Q: Why should people care whether the City’s able to provide enough affordable housing? What’s the problem if people who can’t afford to live in the City end up living outside the City and commuting to work?

A: Some administrations were very blunt. I remember Willie Brown being quoted as saying, “Well, if those people can’t afford to live in the City they should move to Oakland,” just find a cheaper place somewhere else. And it’s in fact what a lot of people are doing.

This administration, on the other hand, has made a lot of its public presence around housing and wanting to preserve the cultural and economic diversity of the City- all the things that make San Francisco what it is because it has been affordable to a range of income levels in the past. If that is the vision, and it is a vision that we at CCHO share, then we need to be honest about how we reach that.

And there’s social justice issues around a right to housing and a right for communities to remain in neighborhoods that they built up. As well as ecological reasons like carbon emissions for why we want economically diverse cities that are not segregated.

Q: Any other observations about the video?

A: The video ends with this housing barometer. It’’s really a product of the Mayor’s Office and trying to set some goals trying to build one third of our housing as affordable housing over the next five years, which is actually you know somewhat impressive. It’s not at all where we need to be but at least it’s setting some goals. What’s a little confusing is the numbers behind that barometer. What are the accomplishments over the last year towards meeting those goals? That’s where it gets a little iffy- you counted certain numbers one way and other numbers a different way and it looks like some of this is being kind of padded. Let’s not mess with the numbers to make us look good. Let’s just be honest about how big a problem it is. 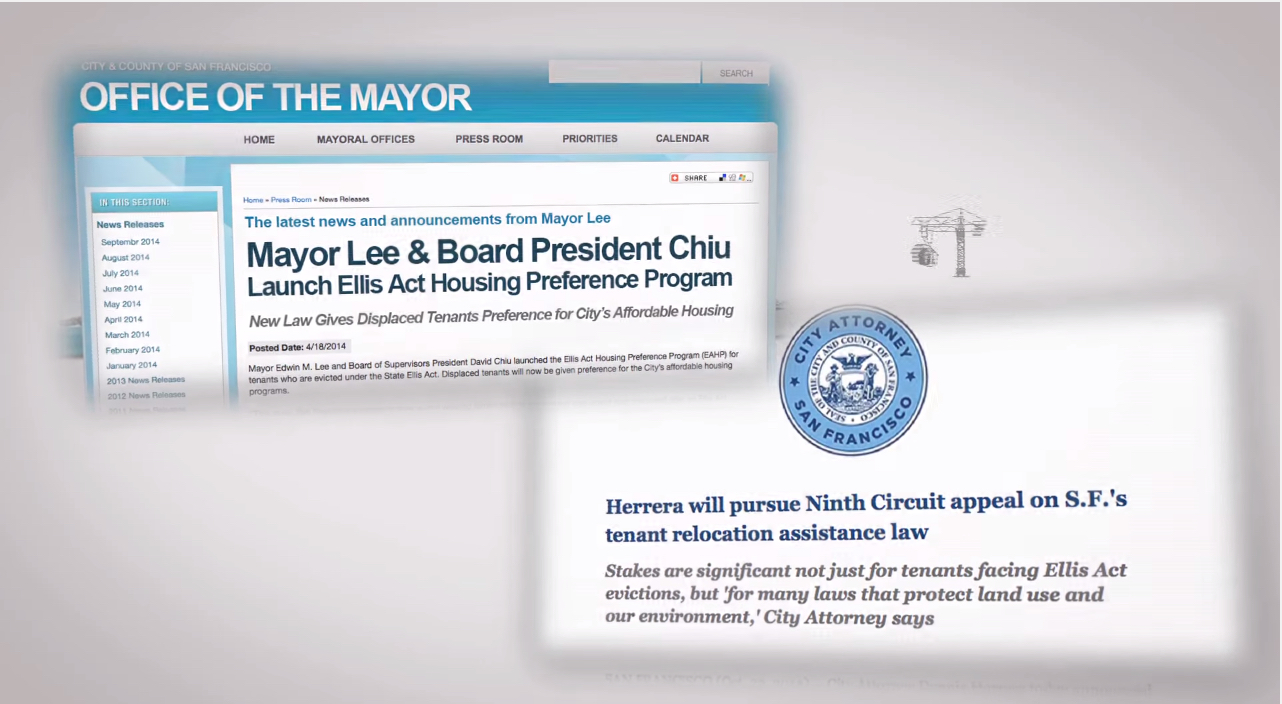 The Housing Dashboard requires publishing data related to meeting our housing goals by income levels on a quarterly basis. These numbers look very different from the Mayor’s housing barometer. And so there’s something’s wrong there.

If there is no democratic accountability back to what people are experiencing, then the accountability is left to these sort of PR infomercials around election time. That becomes the communication between the Departments and the public rather than a robust discussion around whose needs are being met in the City, who’s being left out, what are the real needs, what are the real projections for people’s incomes.

*This interview was edited for clarity and brevity.

Fernando Martí is co-director of the Council of Community Housing Organizations, a licensed architect, writer and exhibiting artist.