On a blustery grey autumn Tuesday, October 14, heavy winds blew piles of garbage and heaps of bad news: two great pillars of San Francisco progressivism fell with brutal abruptness—a venerable community newspaper, and a man who has been central to protecting the city’s renters, and, thus, its economic and cultural diversity and vitality.

For anyone paying attention, the city, already teetering from evictions and a massive demographic and political makeover (aka, gentrification), has been robbed of two core forces of resistance and persistence—the trailblazing Bay Guardian newspaper, and tenants’ rights hero Ted Gullicksen.

According to the San Francisco Chronicle, Gullicksen died at age 61 in hissleep of as- yet unknown causes. Gullicksen directed the Tenants Union since 1988, and played a lead role in numerous campaigns to protect rent control, combat evictions, and to expand affordable housing throughout San Francisco.

The San Francisco Bay Guardian, the prize-winning newspaper and progressive voice, was shut down immediately by the San Francisco Media Company, after 48 years of “printing the news and raising hell.” No warning for staff, just pack your boxes and get out. Boom. This historic independent newspaper, so long a pivotal force in San Francisco progressive politics and culture was suddenly treated as a corporate portfolio item, and lopped off the balance sheet.

Tim Redmond, longtime Bay Guardian executive editor and now editor of 48 hills summarized the grey grim day in an article about Gullicksen’s death: “Damn. Two old friends in one day. I feel as if there’s been some sort of great rend in the fabric of this city.”

Both losses came swiftly and suddenly.

Guardian editor Steven T. Jones recounted to the Chronicle, “We were told at 10 a.m. (Tuesday) that this issue would be our last. They shut down everything — our sites, our social media, our passkeys, right away. We’ve all been laid off, effective immediately…I need an escort to go to the bathroom and get back to the office to pack up my stuff.”

Early that afternoon, I ran into Guardian publisher Marke Bieschke on Market Street, in front of the Westfield Mall that had been home to a cramped Guardian corner office. All his office belongings were piled next to him on the sidewalk: swivel chairs, boxes of files, a few posters. Everyone had been booted out and told to leave the premises.

From a huge two-story building of its own just three years ago, teeming with editorial and advertising staff, the Guardian was now scattered piles of boxed files on a city sidewalk.

That same afternoon, word filtered through progressive circles and “social media” that Ted Gullicksen, the longtime executive director of the Tenants Union—and a tireless, never-daunted fighter for renters’ rights and other social justice issues—had died. Shock and sadness spread across Facebook pages, where, in our strangely alienated and disassociated culture, news of a friend’s death may pop up like any other item on a news feed.

One cannot equate the death of a person with the closure of a newspaper: a human being, while remembered and celebrated, is irreplaceable, their death irrevocable. A newspaper, particularly one so long embedded in communities of resistance, may rise again from its own fertile ashes in one form or another.

But it seems appropriate to mark the passing of Ted and the Guardian together. Both have been pivotal players in creating and defending a San Francisco that is rapidly eroding and disappearing, yet still alive and kicking—a city that celebrates diversity and justice in their deepest sense, by creating the conditions for both to survive and thrive.

Ted Gullicksen: “struggle with a smile”

As activist and writer James Tracy reminded in a blog post, Ted Gullicksen, in addition to his long leadership of the Tenants Union, co-founded Homes Not Jails and “helped in the formation of the Eviction Defense Network, providing astute political analysis and a long list of landlords to picket.” Tracy recalled, “Ted was in struggle with a smile. That’s the way I’m going to remember him. He fought with both fists, both at the ballot box and with a crowbar. But most importantly with a love for San Francisco and the people who live here.”

As word of Ted’s passing became public, friends shared grief, memories, and inspiration. “I just learned that my dear friend Ted Gullicksen passed,” union leader Gabriel Haaland wrote. “I can barely write because I'm crying so hard but I want to thank you for being my mentor, my hero, and my friend.” Haaland added, “Thank you for fighting for renters. Because of you, thousands of tenants are still in their homes. Because of you, we have a fighting chance.”

On Ted’s Facebook wall, activist and friend Sue Vaughn wrote, “Gone to a place where there is housing security, I hope. We miss you so much already, Ted.”

James Chionsini, a longtime activist working with seniors and people with disabilities, expressed sadness about both Ted’s passing and the changing city, with a touch of hope: “We have lost a champion. The pain is amplified by everything I see going on here. This used to feel like a special place; a unique city that served as an oasis in the heart of the empire; a place where young people went to retire; a place where people worked their asses off for a better world.” Chionsini added, “Now the once grubby and enlightened dissident ghetto has become a miserable libertarian spectacle of individualism, accessible only to the privileged. I’m pissed. I’m sad but I have not lost hope. I’m ready to fight. Ted Gullicksen, ¡PRESENTE!”

Calling Gullicksen “a hero of our movement,” District 9 Supervisor David Campos marked the “unbearably sad day” by honoring the housing activist’s “tireless work on behalf of housing justice…Ted was a tenacious activist, always going to bat for those facing landlord harassment or unfair eviction. And while this is a movement of many, there's no doubt that his advocacy and organizing was central to bringing the issue of housing rights to the forefront of our conversation.”

For years I have marveled at Ted’s steady relentless toil, his long unstoppable march for a more just city where all have a roof over their head. Ted was a true warrior who toiled constantly in the political trenches, yet managed to maintain a gentleness and generosity of spirit. In recent years, he was accompanied nearly everywhere by his beloved fluffy white dog Falcor—at the Tenants Union office, political meetings, even protests.

The demise of the Bay Guardian—though perhaps not final, as there is talk of a possible purchase or reviving of the outlet in some form—has been a long time coming, yet still arrived suddenly. Staff were notified Tuesday morning and told to clear out their desks immediately—but not before the company shut down the Guardianwebsite and Facebook page. Articles present and past, and the paper’s much-consulted endorsements, all suddenly inaccessible.

The paper, long suffering losses due to declining advertising revenues among other factors, had shrunk from a roughly 90-page weekly product to a svelte 50 pages or less on most weeks; still, a trimmed-down news and culture editorial team continued to pump out timely in-depth reporting. Founder Bruce B. Brugmann and his wife and co-publisher Jean Dibble sold the paper to the San Francisco Media Company in 2012, adding it to a monopolistic portfolio that included the San Francisco Examinerand SF Weekly, and, later, a substantial share of the Bay Area Reporter.

In a statement after the Guardian’s closure, Brugmann and Dibble wrote, “We put out a helluva newspaper for 48 years. Jean and I are terribly proud of the hundreds of Guardian staffers who for almost five decades created a community-based San Francisco institution and produced one of the most respected and influential alternative newspapers in the country.”

Some criticized Brugmann’s sale of the Guardian to SF Media Company after decades of muckraking and fiery editorials against corporate power and in support of locally-owned independent business.

Since its launch in 1966—financed, ironically, by a victorious lawsuit against a “joint operating agreement” between the Chronicle and the Examiner—the Bay Guardian broke major local and national stories, winning many journalism prizes over the decades.

For hundreds of journalists and activists over those years (including myself, having written for the paper since 1995 and worked as city editor in the early 2000s), the Guardian became a training ground, a sounding board, and a rare source of fact-based progressivism and highly respected reporting. Young journalists, including longtime executive editor Tim Redmond (who has since launched the news outlet 48 hills) cut their teeth covering City Hall and state politics, and uncovering scandals few other outlets would touch, from corporate webs of power to inhumane conditions in public housing, among other issues.

The Guardian and left/progressive communities have not always seen eye to eye. Election seasons have been an ongoing source of debate and dissent, with some on the left criticizing the paper for being too moderate or accommodating at times; and community activists sometimes took the paper to task for not covering or supporting labor or communities of color sufficiently.

Still, the Guardian has been at the center of city politics and culture, in the eye of the storm, and for many the paper has been a rare and comforting voice (“afflicting the comfortable,” as the Mother Jones saying goes)—for both progressive views and in-depth news that few others would report.

Rebecca Bowe, the Guardian’s latest/last news editor, drew attention to the larger importance of the paper’s closure in the context of an ever-consolidating corporate media and the rapidly dwindling space for alternative politics and culture that do not boost corporations’ bottom lines. “The people who shut down the Bay Guardian today saw no value in the newspaper. The reason why is because their jobs demand that they remain blind to all but monetary value,” Bowe wrote.

Bowe lamented the brutally sudden shutdown of “a newspaper produced with love and sweat, published for a community of engaged, active, intelligent people who call San Francisco home.” But, she added, “Let's build something new, please. Because that mindset equals insanity.”

This Tuesday, the cruel insanity of our corporate-dominated culture and economy, and of life itself, struck hard. The question will be how we strike back—on behalf of Ted Gullicksen’s legacy, for renters’ rights, for a truly affordable city, for media democracy and progressive voices, and for a San Francisco that holds and honors the diversity and justice that both Ted and the Guardian represent.

Contributor
Christopher D. Cook is an author and award-winning journalist whose work has appeared in the LA Times, The Economist, The Nation, and Mother Jones.
Learn More 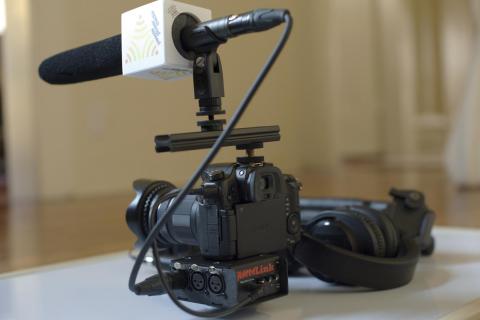 What's in My Camera Bag!
What's Next for the San Francisco Bay Guardian
How Net Neutrality Impacts People of Color
See All
Watch "Priced Out" our award-winning animated short about why you can't afford to live in the city. Watch