Tenants and tenants rights organizations rallied in San Francisco as part of a Statewide day of protests against corporate landlords. With the backdrop of Financial District highrises, the protesters attempted to reach the executive offices of Starwood Waypoint, landlord to tens of thousands of residents across the United States. 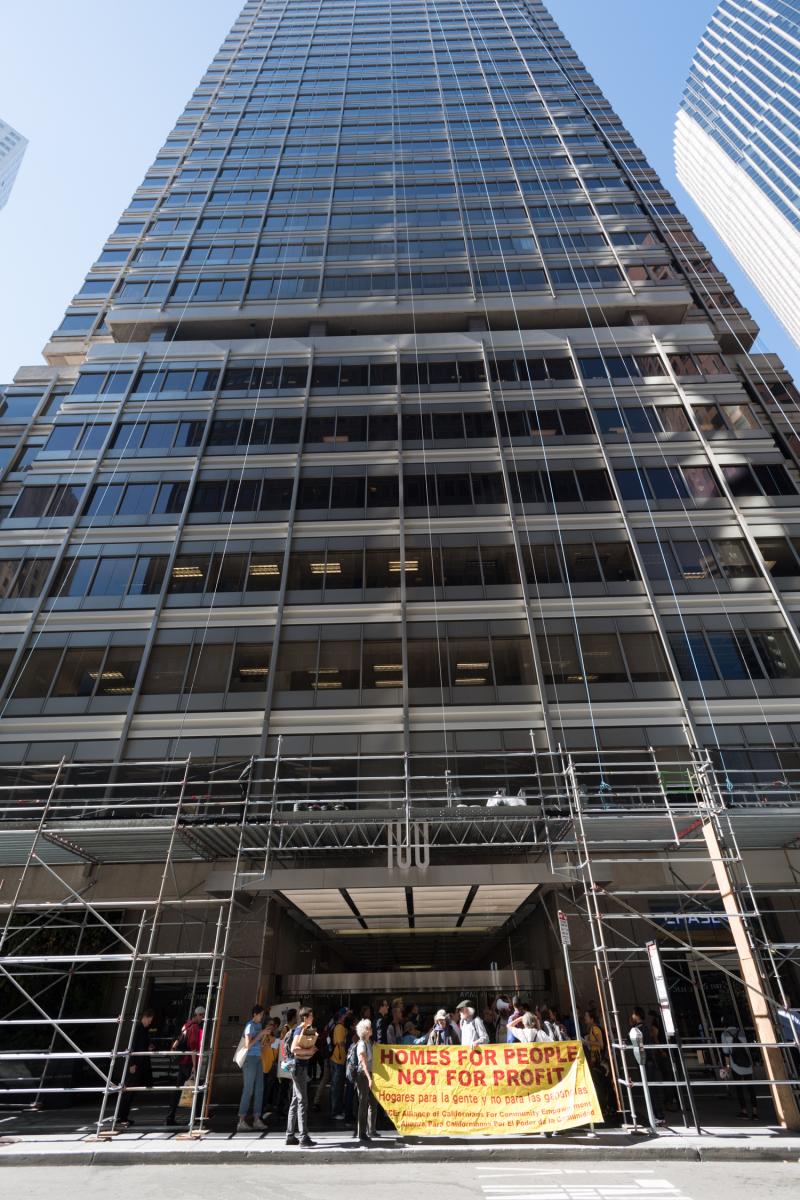 Security shut down the elevators, blocking protesters from delivering a letter signed by dozens of tenants demanding a meeting with Executive Chairman of Starwood Capital Group, Barry Sternlicht. The meeting would have been to discuss lowering the rent on units Starwood owns in Oakland where increases have created a huge financial burden for residents.

Because of rising rents throughout the State, there’s a growing tenant movement demanding rent control. These efforts generally aren’t directed at small landlords, but at the growing influence of corporate landlords that are raising rents to deliver for their shareholders.

"We had our demand letter faxed to Barry Sternlicht,” ACCE (Alliance of Californians for Community Empowerment) representative Anya Svanoe said via email, “but we know that we need to keep pushing.” "Our lives, our families and our homes are at stake," she continued. 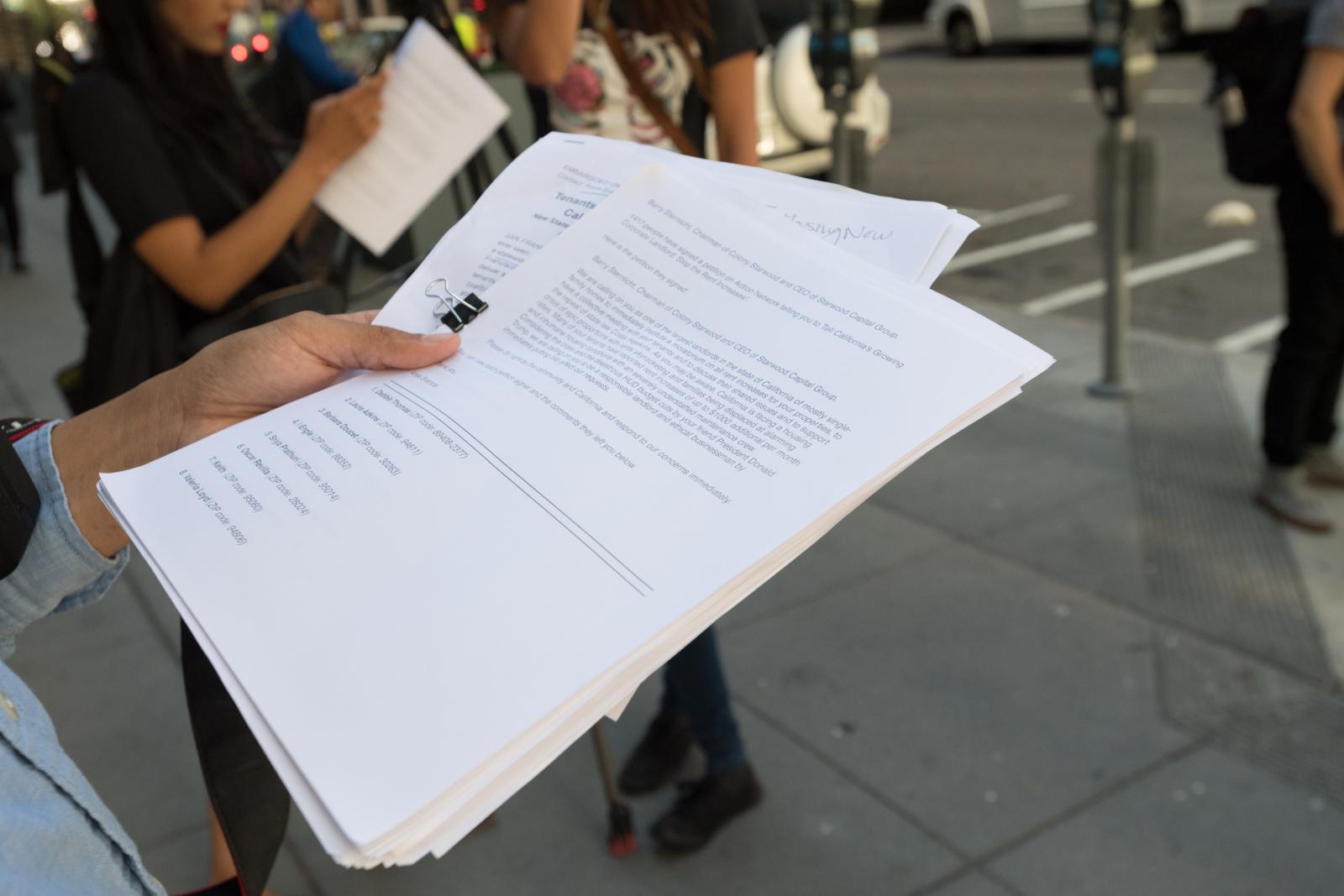 A cluster of corporations with the Starwood name is involved in real estate ownership and management. These are residential properties and are part of a growing market sector called Real Estate Investment Trusts or REITs that are traded on the stock market. Before the foreclosure crisis, real estate speculation in the residential sector was focused on homeownership. Interest rates were at historic lows, so people who needed housing were drawn to living out the American dream of owning their own place.

That dream came crashing down starting when the market collapsed in 2008. Many homeowners became renters, and other homes became vacant after being repossessed by the banks that provided the junk loans. Large corporations have scooped up much of the housing stock, picking it up at a discount. As interest rates are starting to rise, people looking for housing will likely continue to look to the rental market rather than trying to purchase a home. This means that corporate landlords have every incentive to squeeze out lower income households to make room for those with higher incomes so they can charge higher rents. Higher rents mean higher stock prices and more dividends for their shareholders.

One of the protestors was small business owner Merika Reagan who rents a single family home in Oakland, was struggling to make ends meet when she was hit with a big rent increase. She's seen the success of community organizing in her own life. She said, “I joined ACCE and through community action and organizing I was able to negotiate a $50 rent increase instead of $350.”

Starwood isn’t the only corporation cashing in on the Bay Area real estate frenzy. After the rally in the Financial District, a contingent gathered in the Tenderloin to do outreach to 20 apartment buildings targeted by speculators. 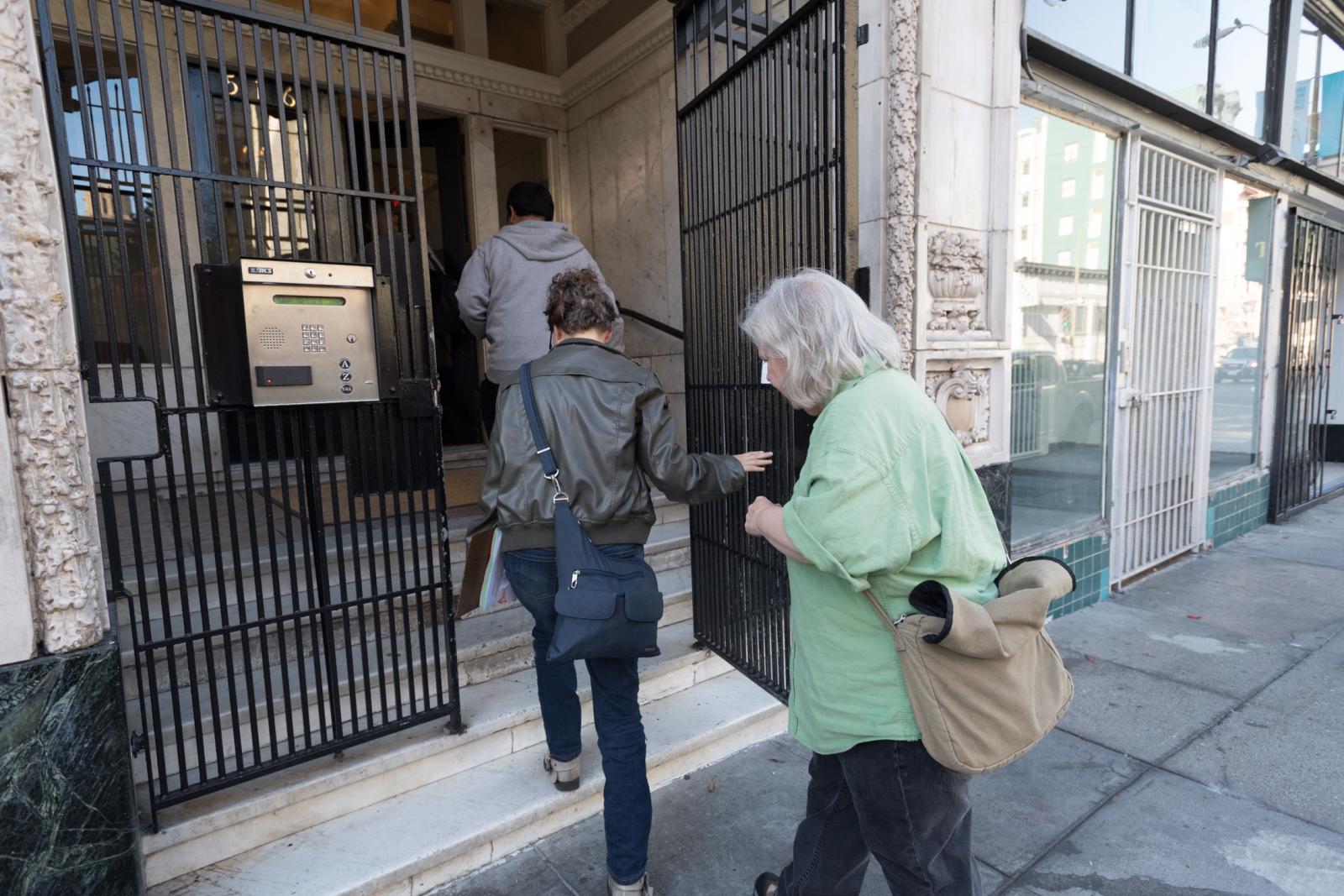 This practice is not just confined to San Francisco or the Bay Area. The Housing Now! coalition is organizing across California to bring attention to the affordable crisis Wall Street has brought to California -- tenants and homeowners alike.

As Reagan told the crowd, “No one should have to live with this kind of anxiety of thinking ‘I’m going to be in a tent city or trying to hitchhike to another State.”

Racial Equity Forum: API and Black Solidarity
Exclusive Exposé: The Wild West of Landlord Technology
How a Rent Freeze Solves the Housing Crisis
See All
Watch "Priced Out" our award-winning animated short about why you can't afford to live in the city. Watch