Activist and Journalist Shot in the Philippines Returns to San Francisco

Dyan Ruiz, Reporter, [people. power. media]: Friends, family and supporters including local politicians gathered before dawn on Saturday to welcome back home wounded journalist and activist, Brandon Lee. Lee was born and raised in San Francisco and was shot outside his home in the northern Philippines in August of this year.

The Chairperson for the International Coalition for Human Rights in the Philippines, Pam Tau Lee, was with the group waiting for Brandon Lee to arrive in San Francisco.

Pam Tau Lee, Chairperson, International Coalition for Human Rights in the Philippines: He has been standing up for the people in their struggle for democracy and liberation. During the course of this work been there side by side with on the front lines with farmers and peasants and workers.

Ruiz: Because of Lee’s tenuous health, and the length of the journey from the Philippines, he had to be flown in a special ambulance aircraft. He continues to be in intensive care. Advocates have hosted a number of fundraising events and an online campaign to make this trip possible.

Princess Bustos: This is a culmination of all the hard work, dedication and support of so many people, thousands of people that didn’t even know Brandon but heard his story and supported him. All over the US. So, we’re very happy that we’ll be seeing our friend soon and hopefully from here, he’ll continue to recuperate.

Ruiz: Local politicians have also supported his return. Supervisor Matt Haney traveled to the Philippines to visit Lee in the hospital, and wrote a resolution condemning his assassination attempt. Supervisor Gordon Mar who met Lee years ago through the Chinese Progressive Association led a rally in August demanding security protection for Lee from the US Embassy and a thorough investigation into the shooting.

As Lee continues to fight for his life, his family and advocates continue to pursue justice.

Bustos: His perpetrator is still at large in the Philippines. They have not been brought to justice yet. So, Brandon is here to ensure that his safety is protected and that he can continue to receive the medical care to bring him back to health.

Lee: We want to call on the Congressional leaders to launch a full investigation of what’s going on in the Philippines and in particularly what has happened with Brandon. In the meantime, as they are conducting that investigation, that funding towards the military- US tax dollars- should be stopped.

The attempt on Brandon’s life will not silence the work and in fact will amplify it more. We are here to assure Brandon that the work will make a difference, and for him to concentrate on his recovery.

Bustos: We are still very concerned about his safety. The people that have attempted to assassinate him are still at large. And we don’t know at what extent they’ll go to finish what they’ve started.

Brandon’s case is not alone. There are hundreds and thousands of people in the Philippines who have experienced what he’s experienced. Others who were not so lucky. And Brandon’s story is one of the thousands and we need to continue to seek justice not only for Brandon but all the other families who have lost their loved ones due to the political killings happening in the Philippines. And we want justice for Brandon. We want justice for all of them.

Ruiz: This is Dyan Ruiz for People Power Media

Thank you to Narissa Lee, SF-CHRP (San Francisco Chapter of the Coalition for Human Rights in the Philippines), Princess Bustos and Freedom Siyam for contributing video footage for this story! 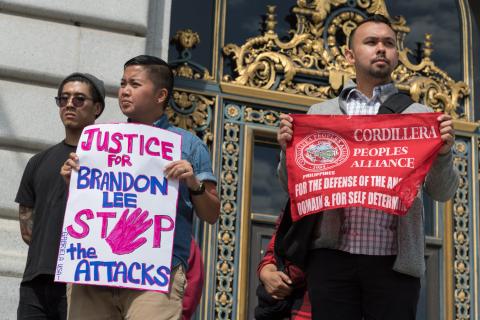 American Defender of Indigenous People Shot in the Philippines
92-Year-Old Among Filipinos Facing Eviction in SoMa
Solidarity Action Protesting Violence against Filipino Farmers
See All
Watch "Priced Out" our award-winning animated short about why you can't afford to live in the city. Watch