SF Bay Area Renters’ Federation (SF-BARF) presented the “Inaugural SF BARF Panel: ‘The Political Landscape’” on the evening of February 2. The event’s facebook page said BARF’s goal is to “organize renters (and allies) to agitate for increasing the supply of housing in San Francisco, Oakland and the Bay Area.” They say the problem with housing is political. There isn’t enough political will to bust out of current limitations on growth.

The evangelist for this new group is Sonja Trauss who claims that people in San Francisco are anti-growth and anti-progress, and increasing housing costs are the result. The packed crowd ate it all up. This is the same rhetoric realtors, the Planning Department, the Mayor’s office and developers are using to justify massive new luxury condo buildings, while the supply of affordable housing for low and moderate income households is neglected.

When Valdez spoke he was bitter and condescending. He continually painted anyone who tried to question the development of high rise condos as either Occupy protesters or single family homeowners protecting home values. These two groups have apparently teamed up in some sort of unholy alliance to stop development. He advocated for abolishing zoning because he says it’s an outmoded concept that should be replaced by laissez-faire, and unshackled from the oppressive bonds of community consultation, environmental review and height limits.

Attendees scooped up flyers saying “Go big or I can’t go home,” showing examples of developments that could have been so much bigger if community residents and workers hadn’t gotten in the way. They also had an architect’s rendition of what the City could build on the Balboa Reservoir, a public site proposed by the City for development. The rendering looks like what happens when you leave Sim City running overnight instead of hitting pause with huge towers bulging out of a low-rise community.

Never mind that even San Francisco’s Chief Economist Ted Egan says building 100,000 new housing units will only make a quarter of the housing market affordable to some middle-income people. So, shouldn’t we be asking who all this new housing is for?

When Downing spoke, she started by pointing her fingers at San Francisco’s low housing production. But Cutler reminded her that Palo Alto hasn’t done much to tip the supply scales in many, many years. Downing did put forward the most nuanced ideas in the group citing how suburban cities like Bethseda, MD were able to successfully densify and make walkable communities.

Cohen, a real estate investor, told the audience that Governor Brown shouldn’t have dissolved California’s Redevelopment Agencies because those entities could provide capital for development even in economic downturns, thereby smoothing out the ups and downs of the market.

Wait a second, did we hear right? Ups and downs? Does that mean that sometimes the pace of market rate development slows down or stops? Does that mean that market rate developers have a hard time finding investors and lenders in a declining market? So if the City builds its mega-towers, and housing prices start to go down because of the flood of supply or macro issues beyond our control, housing production will grind to a halt? But what about all the middle income people who were supposed to be saved by flooding the market?

What SF BARF can’t stomach are some fundamental truths about housing and activism in San Francisco.

The first is that much of the activism hasn’t been to stop new housing, but to hold developers and policy makers accountable to the needs of people who live or work in this City who can’t afford market rate housing. Prices for housing in these new developments are constantly hitting new heights that are only “affordable” for people earning 150% of the area’s median income (AMI) and above.

Considering the definition of “median” is that half the people earn more and half earn less, this means most of us can’t afford any of the new housing that’s coming on the market, except the precious few “inclusionary” or “below market rate” units they’re required to put in. 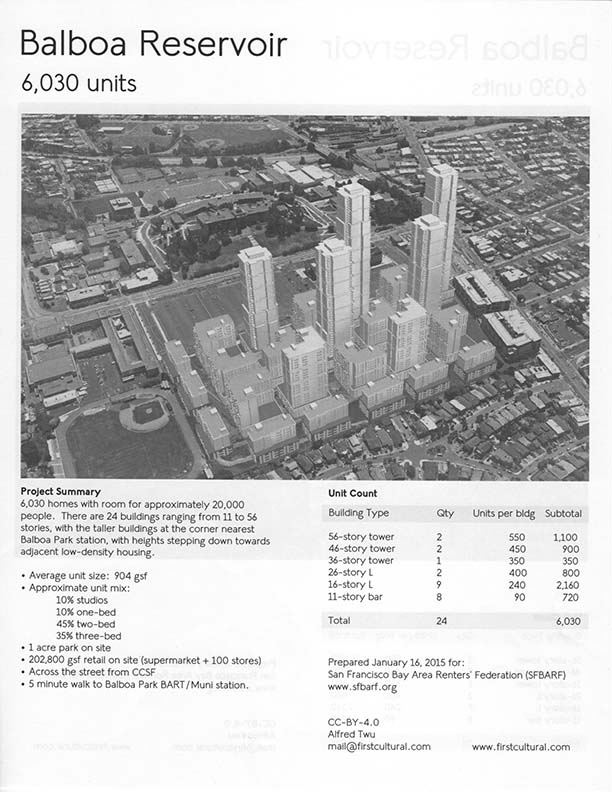 Just to put in perspective how many San Franciscans are being pushed out of the market right now, more than 10,000 adults or families signed up for the Housing Authority’s wait list over a six-day period in January 2015. These people will be added to the existing wait list of over 7,000 people. Only about 200 of those families will be housed this Spring. Tell those people on the list that the solution is more luxury housing

The second thing SF-BARF needs to know is that the City has housing production goals that are established by income level based on meeting the housing needs of various sectors of our workforce. The problem is that the City and supply-side proponents expect that developers out of the kindness of their hearts won't all go for the highest end of the market. But of course, tried and true capitalists will always follow the money.

The Planning Department presents a quarterly report to the Board of Supervisors to show our progress toward meeting these production goals. We are overproducing at the top end of the market and we are desperately under-producing for low and middle incomes.

There is no example of an unregulated housing market that provides housing affordable to everyone at all income levels. People in San Francisco aren’t against change or progress. What San Franciscans are concerned about is who is being left out.

We need affordable housing for seniors, families, working people, people with disabilities. The market will not provide for these sectors unless it’s forced to. There used to be a progressive role of government in creating and funding programs that prioritized construction of affordable housing. A succession of Presidents and Governors have all but eliminated these programs. The market saw to it that they didn’t have any competition from the government and nonprofit sectors.

Until we understand that the free market has no incentive to provide for all people, and that we need to make affordable housing the top policy priority, we will all lose.

How a Rent Freeze Solves the Housing Crisis
Op-Ed: SB 827 is a Gentrification Bomb
Op-Ed: Transit Decoy for Gentrification
See All
Watch "Priced Out" our award-winning animated short about why you can't afford to live in the city. Watch