Middle school student from Mendota in western Fresno County breaks down the impacts of the California drought on farm workers in one of People Power Media's best interviewees.

Interview with Nacho Ledesma conducted on May 16, 2015. Reporters Dyan Ruiz and Joseph Smooke were not miked, so their questions are subtitled.

Dyan Ruiz: How do you see the drought affecting some of the families you know?

Nacho Ledesma: Some of the families it's hard from them because they came from wherever they came from, El Salvador, Mexico, whatever, they came to have an education for their kids so they can better than their parents. And most of these kids they like school, but it's hard because their parents are getting out of work. So it's kind of difficult for them because they're not getting that much money. Cuz of the lack of water in the crops. Most of the parents are in the fields, they hardly have work. Some people are homeless, walking up and down the street looking for money.

And there's people who go to church praying they'll get a job, but it's hard because of the lack of rain, the lack of water, no more crops. There's hardly crops now. It's hard for everybody to work.

Ruiz: Do you know people who have moved away? Are a lot of people moving away?

And it's hard for them because if they don't get no money, then how are they going to pay for their water?

Now they put locks on their meters so they can't turn it on to take a shower or to get a cup of water.

Joseph Smooke: What about the people you know at school? Are they struggling?

Ledesma: They need papers for school. Or they need pencils, pens. Simple things like that. Like extra money to buy snacks at schools, or whatever.

Like my parents too. My mom only has a job right now. And it's hard for her because she's working at Burger King. She's been working there for a while, she gets more money than other people, just a little bit, like 50 cents or something an hour. So she's kind of alright.

It's pretty hard for everyone else..

My daddy had a stroke so he can't work. So it's hard for us too. But we're not going to move because we have so many memories here.

Smooke: Do most people you know work in the fields?

Ledesma: My friends across the street, on the weekends, sometimes they work sometimes on the fields, getting extra money for their parents.

My friends' dad works in the lettuce, he's a supervisor. He drives a nice truck, but it's hard for him.

And in the fields it's hard for the workers because there's really not that much water. They put locks on the meters and everything. Say they don't have a lot of water planting onions or melons or whatever.

They try to make the workers, cut cherry branches, anything, because they know what people are going through here and it's hard for everybody else.

Smooke: Talk about what age they’re working and why.

Ledesma: 15 and above mainly. Because they see that their parents need help doing things. Because they're parents are getting older or retiring. They just can't do it anymore. Some of my family members are still working in the fields and it's hard for them.

So would you rather have someone older and already like done with working or have someone young and learn OK, you have to get an education. You don't want to be doing this your whole life.

Like me, I'd rather work now so I can see, OK, do I want to be doing this my whole life or just summers? I'd rather get an education. Me personally I'd like to be a mechanic because I like to work with cars.

But right now, I'd rather do what I'd like to do. I don't like to ask my parents, oh can you buy me this. I'd rather go sell cans. I'm not ashamed of it. or car batteries, easy 6 dollars. I share with my little brothers and sisters.

Ruiz: Are you hearing from your friends that it’s hard to stay in school?

Ledesma: No, they like it [school] a lot too. because it's fun. Like yesterday they had a career day. And I went to the army one, firefighter, auto mechanic, and team builder.

Where I a guy is telling you, do not give up. The most important thing why people give up in school is because they don't know how to read. They way people are reading, it changes everything. Once you know how to read very good.

So you pull out a book, and you're reading it, like I like dogs. You're going to forget it in the end ...

Reading makes school easier, from what he was telling us.

Ruiz: Some of your friends and other classmates have a hard time reading?

... It's because mainly people in our school speak Spanish and it's really hard for them to understand English. And when I see someone really not understanding. I ask them, hey what’s wrong, or do you need help, because most of these people are shy or they're embarrassed to ask questions. It's hard for them because they don't know how to ask in the right way.

Like the teacher that told us, if you have a question, ask, because what if other people have that same question and no body asks. And nobody gets learned. One person can change the world. 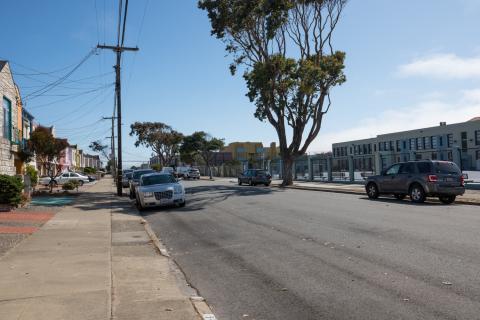