Nearly 200 protesters from the Filipino community, faith groups, and civic organizations gathered in front of the Philippine Consulate in downtown San Francisco on April 5, calling for justice and demanding accountability for the Philippine government’s violent action against protesting farmers on April 1 that resulted in two deaths and 116 injured in Kidapawan, Philippines.

A group of community representatives went inside the Philippine Consulate to speak with Consul General Henry Bensurto, but he did not address the crowd. 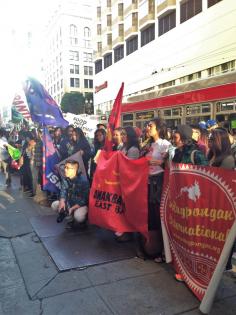 Katie Joaquin, the International Council on Human Rights Policy (ICHRP) Nor-Cal Network Coordinator, talked about the support farmers in Kidapawan desperately need at this time. “Up to now, they are still needing support in terms of basic things like electricity and food, so the suffering is great,” said Joaquin. “And for us, it was a very basic request that the government provide relief and release rice, but instead, the government responded in violence,” Joaquin continued.

On April 1, over 5,000 farmers gathered in Kidapawan in North Cotabato Province in the southern Philippines, demanding the local government release 15,000 sacks of rice, free vegetable seedings, and financial subsidies in the wake of months of drought. Instead of providing the requested aid, the Philippines National Police opened fired on the rally, killing two farmers and wounding over 100 people. Seventy-eight people were also detained during the bloody dispersal.

Princess Bustos of Migrante Partylist-USA who addressed the crowd in San Francisco listed out the actions that need to be taken. “What we demand is to ensure the farmers get the rice that they have been demanding for; medical attention for people who were beaten,” said Bustos, “and to make sure to hold accountable the police officers and local government. And even President Aquino who has remained silent throughout this whole time.”

“Governor Lala Mendoza shows that the Liberal Party truly has no concern for the lives of their constituents and other Filipinos when more than 5,000 farmers and their families are literally starving for months with no support from the government,” Bustos said.

Churches, organizations, and advocates around the world were furious by the violent action taken by the Philippines police and local government, and many offered support and donation for the farmers. However, Cotabato Governor Lala Talnio-Mendoza, who ordered the police to take violent actions, claimed to block any help or donations, saying it would be an insult to her administration.

Reverend Jeannelle Ablola, Co-Chair of the United Methodist Church Cal-Nevada Philippine Solidarity Task Force, was one of the representatives who spoke with Consul General Bensurto. “It is very heartbreaking to me that people had to die when they are calling out for food, calling out for relief,” Ablola said.

“Our global church over there has provided sanctuary and refuge for a lot of the farmers who were running away from the violent dispersal. The Bishops of the area, Bishop Francisco, he actually got a letter threatening legal recourse for providing that refuge,” said Ablola. “Also yesterday, I saw the Mayor of Kidapawan also wrote a letter threatening the Methodist facility, saying that it is illegal for them to harbor the people they are looking for.”

San Francisco District 11 Supervisor, John Avalos, joined the action to show solidarity with the Filipino community. “With globalization and climate change, those have fallen in other parts of the world as disaster, deprivation, displacement, and state violence. Farmers who are suffering from drought cannot grow their crops. They were requesting aid from local government but were met with bullets instead of rice,” Avalos said. 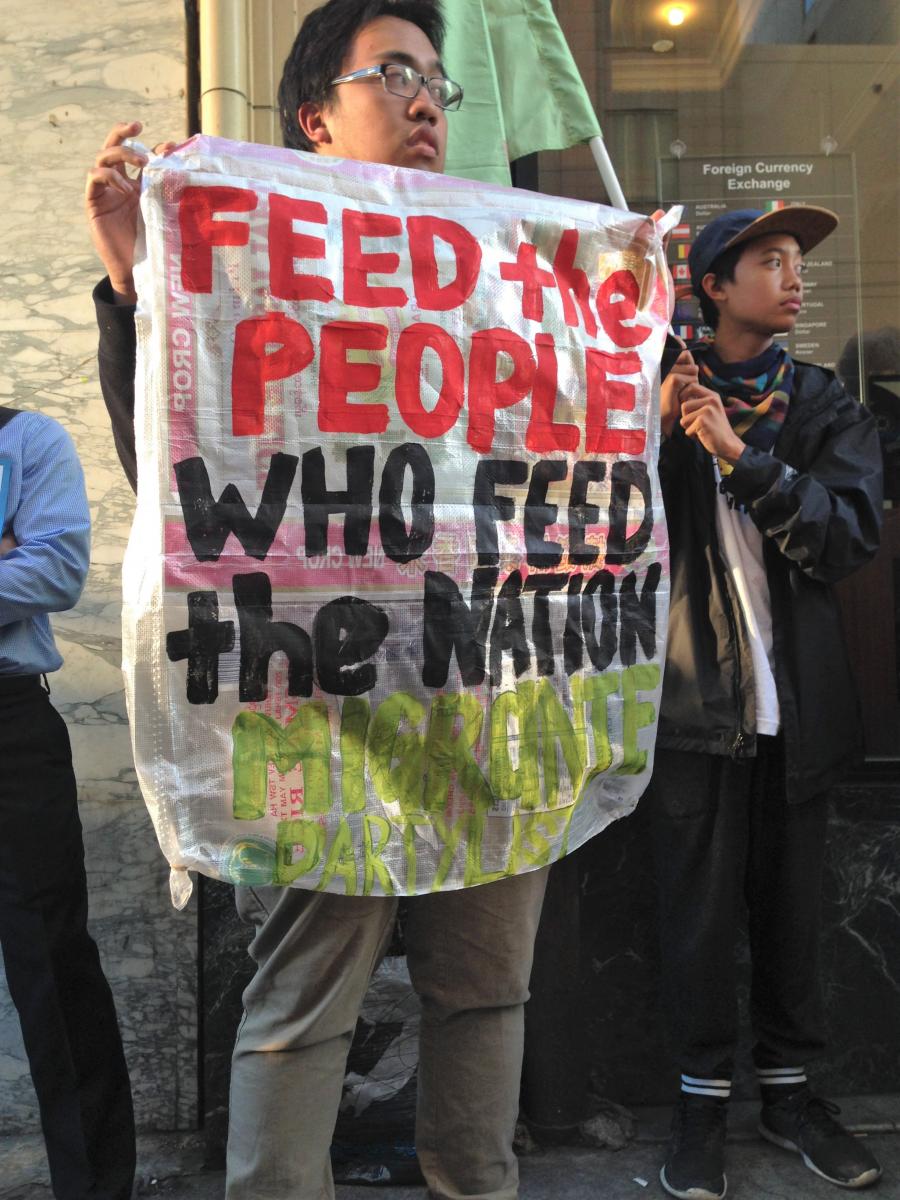 “This is a condition that many people, people in the United States and the global north, don't understand or comprehend,” Avalos stated. “It’s events like this that can raise people's awareness that can challenge the system’s oppression, and call for reform and independent investigation.”

To show further support of victims under the Philippine Government’s violent dispersal, ICHRP-Norcal is launching a 24 hour fast in solidarity with the farmers in Cotabato and the victims of the Kidapawan Massacre on April 7 at 6pm. This effort is in coordination with a Global Day of Action for Food and Justice on April 8.

Yi-Jen, born and raised in Taipei, has a BA degree in sociology from University of Oregon. She is a journalist, an activist, and an idealist.