California is 50th in the nation for per student public school funding.

So what happens when a huge condo development is proposed for the site adjacent a public Spanish immersion Elementary School whose play yard would be overshadowed by the new condo towers?

School parents and administrators become divided between those who demand that their children’s health and education not be impacted by dust, noise and shade, and those who want to extract as much money and “community benefits” as they can from the developer in order to backfill the education cuts from Sacramento.

The developers of the proposed project, Maximus Real Estate Partners, has offered $3 million in benefits to the school based on a number of meetings with community organizations and families and staff affiliated with Marshall Elementary. The bulk of that cost will go towards an elevated play yard to lift the students’ play area out of some of the shadow cast by their proposed five and ten storey towers.

The Executive Vice President at Maximus, Seth Mallen, and their Architect, Leo Chow of Skidmore Owings and Merrill, presented their shadow diagrams and their scheme to raise the playground to the Board of Education’s Building Grounds and Services Committee on June 23, 2014. The hearing room was packed with parents, teachers and community members who lined up to voice their concerns about the development.

As Board members Hydra Mendoza and Sandra Lee Fewer noted, concerns about condo developments are typically just heard at Planning Commission and the Board of Supervisors. They called for this hearing, however, to explore the impacts this massive development will have on the education of Marshall’s students.

Some of the impacts would be immediate if the development is approved. Demolition and construction of the of their 345-unit residential with retail space will cause dust and noise and block surrounding streets. The developer estimates that these impacts would last for 21 months, enough to impact 2 school years.

“Not to sound dramatic, but it sounds like a war zone” said Bianca Starr, mother of a recent Marshall graduate and a current Marshall student. Both of her sons have asthma and she is concerned about how her younger son’s health will be impacted, including from the noise that will disrupt class time.

Many of the comments raised at the public hearing were also about the shadow the new buildings will cast on the schoolyard directly beside the proposed development site.

The Planning Department in their Preliminary Project Assessment of December 2013 called this out as a concern, but could not recommend exact mitigations because their standards only apply when a shadow falls on a public park or plaza.

To address this concern, the developer and their architect proposed to build an elevated play area to reduce its time in the shade rather than reducing the number of storeys in the building complex. Maximus is building to the limits allowed in the City’s zoning. According to a spokesperson for Maximus, Christian Lampley, approval of any construction on school property would have to be through the School District and the State Architect.

One major logistic the school would have to deal with is a temporary play yard while the new one is being built. Lampley also said construction of the raised play area will take five to six months with most of that time coinciding with the school’s summer break.

A community member raised the question as to whether the cost of providing the elevated play area would be subtracted out of the developer’s impact fees. We contacted Planning staff who told us that any costs the developer wants to subtract out would have to be approved through an In-Kind Improvements Agreement process.

The hardest issues to forecast are the long term impacts of the proposed development.

The amount of parents wanting to send their kids to Marshall could increase dramatically. The developers say the buildings will include 42 Below Market Rate units. There’s a new affordable family housing planned at 1950 Mission. Far more students than the school has capacity for may be the result once the families move in.

“A school yard isn’t going to do it for us,” said Board President Fewer said to the developers after their presentation. “Marshall has capacity for a 255 students. I feel like a generous offer would be to build us a whole new school,” she said.

She also agrees with the concern raised by many of the parents and community members about the gentrification the development would cause in the long term.

Community members at the hearing say that rents will start at $3,500/ mo. The developers would not confirm this figure, but this is close to the average current rents in San Francisco. Market rents when the development is move-in ready may grow by then.

As Fewer said in her comments, over time, the gentrification caused by large scale market rate developments such as this one at 1979 Mission will result in less and less children attending Marshall Elementary. Per the School District’s statistics, 61% of students qualify for subsidized lunch. Higher income families are sending their children to private schools, not public schools like Marshall.

So in the short term, there could be a spike in demand over the next few years as new affordable family housing gets built. Then in the long term, a drop in enrollment as middle and lower income families are replaced by more affluent ones going to private school.

[people. power. media] believes in Community Engagement. We participated in meetings with the Plaza 16 Coalition from October 30, 2014 through 2015. 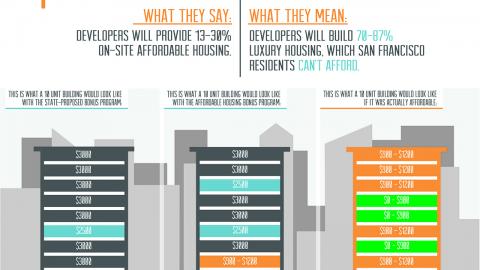