Episode 4: “They Left Their Home in San Francisco”

Continuing on their quest, Curtis and Riley meet their realtor in the Mission District to look at a place in an older building that they're hoping will be more affordable than a unit in a new condo tower. A Mission mural comes to life and tells the story of how real estate in San Francisco became so valuable.

The Mural tells the story of how San Francisco real estate became so valuable. It’s a story told with particular details about San Francisco, but it is a history that is common to most if not all cities around the US and even beyond our borders. Cities have changed over time, and those changes have been the result of deliberate legislative and systems created to benefit the wealthy or ruling classes. There’s a lot going on in the mural scene. Here’s the complete breakdown:

The latest tech boom is taking over the entire financial district and south of market, parts of the Bayview, Potrero Hill. There is so much money in these new corporations that there’s even a massive building boom of new office towers. https://digital.olivesoftware.com/Olive/ODN/SanFranciscoChronicle/shared/ShowArticle.aspx?doc=HSFC%2F2019%2F05%2F25&entity=Ar02301&sk=423E6D04&mode=text ** https://www.bisnow.com/san-francisco/news/office/tech-dominates-large-leasing-activity-in-san-francisco-in-2017-77909 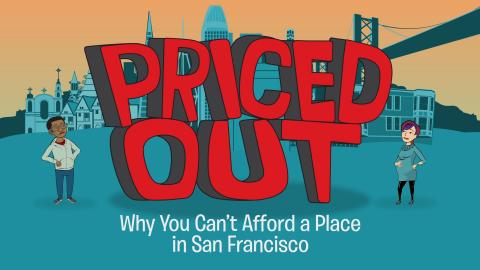 "Priced Out" Trailer
Episode 1: "Isn't There an App for That?"
Behind the Scenes: Illustrating "Priced Out"
See All
Watch "Priced Out" our award-winning animated short about why you can't afford to live in the city. Watch